I’m getting truly terrible at posting the adorable moments that happen around here. So, here are some pictures and videos to show that we still exist.

We went to the farm again on Friday, this time with a couple friends. Mitchell’s friend taught him that sticks are really light sabers, a lesson he thankfully didn’t bring home with him. Rosie even made a friend, even though that friend’s favorite game was eat-her-face. And, true to form, the kids all decided that, as much fun as it was to see animals and visit the farm…OMG DID YOU SEE THIS PUDDLE?! 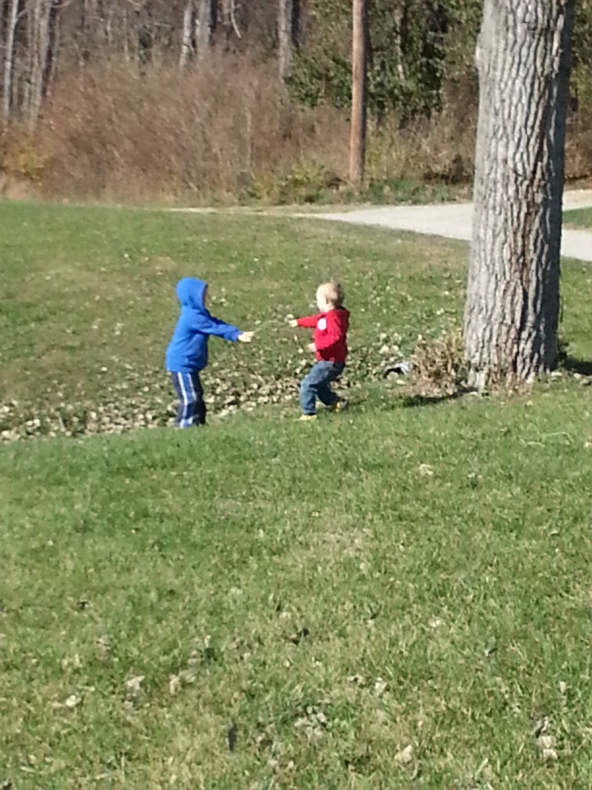 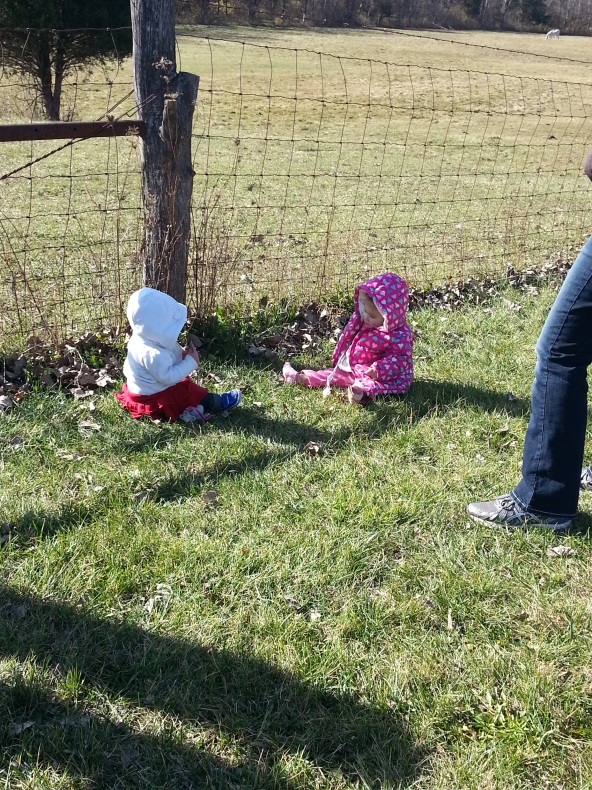 Because the point of crafts shows is to use your goods merely to barter with other vendors, Mitchell is now the proud owner of a minion hat. And I do need to stress the word proud.

And now, the promised videos.

Rosie has decided that climbing the stairs is the funnest game this house has to offer. She loves being chased up the stairs. Mitchell always thinks she is going upstairs to play with him, so he always yells at me to stay downstairs while they go play. I’ll remind him of that in a couple years! (Or even tomorrow when she tries to eat his Daniel Tiger doll again.)

This phase always makes me thankful for dogs.

She definitely thinks she’s getting big!

New game: ribbit ribbit. Basically, he hops with Roe in the room. But she MUST be in the room!

Well, I’m about to go to the grocery store, in the evening, two days before Thanksgiving, with two unnapped kids. So I need to get my wits about me. Thankfully I just reminded myself that they’re adorable at least 51% of the time. Hopefully that’ll keep me from abandoning them in the middle of aisle 3 with the too-much-advice stranger.

With the encouragement of my friends and family and especially Justin, I’ve begun a new labor of love: a custom t-shirt shop. 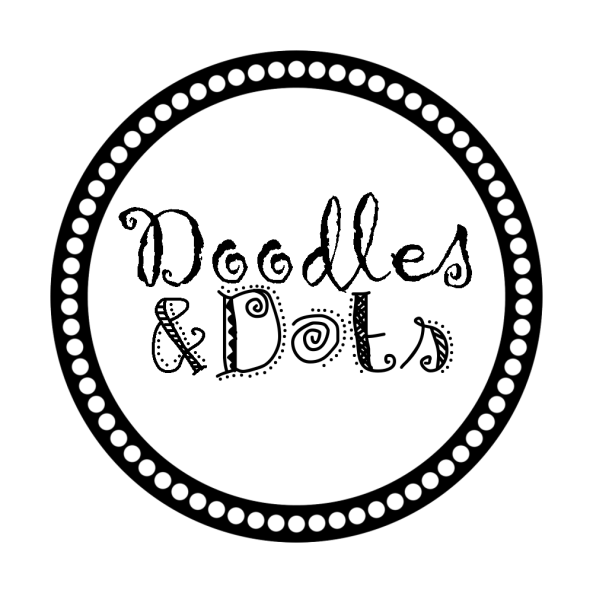 I hope this explains my disappearance. I did a show last weekend and spent the previous couple weeks in the basement making shirts. Lots and lots and lots of shirts. That pretty much didn’t sell at the show, because only about 50 people walked through there. But that’s ok, I learned a lot from the other vendors and did sell several shirts. And things have picked up on the Etsy shop, so I’m still keeping busy, and I have another show coming up.

So, if someone on your Christmas list is into sarcastic shirts or wants some shirts for their kids, head over to my Etsy shop please!  https://www.etsy.com/shop/QuirkyKansan 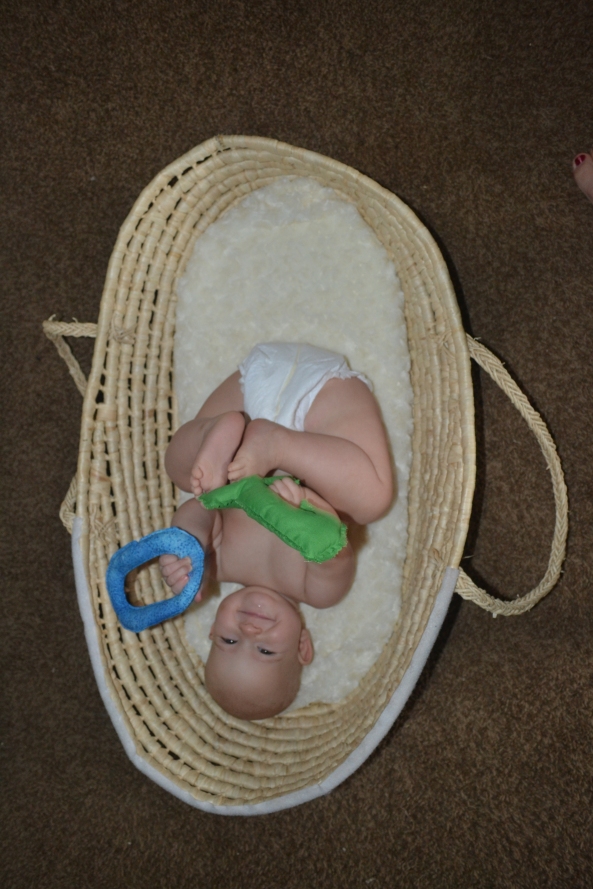 I can’t believe I haven’t posted a single thing in 10 days. It’s been a whirlwind of activity around here the last couple weeks. My camera was actually dusty when I tried to take her 10 month pictures.

Rosalynn is ten months old now! But speaking of how old she is or how close she is to one year is strictly forbidden around here. FORBIDDEN.

She can stand on her own for about five seconds now, loves pushing things across the floor, and likes holding on to my legs as I walk so she can walk behind, which means I’ve slowed down a LOT.

She also has a TEMPER. Seriously, a temper. I knew there would be sibling issues, but I assumed they’d go the other way. I thought Mitchell would be the jealous one. But if she sees Mitchell sitting in my lap, she screams. Her angry scream is remarkably similar to her hurt scream, so I have to watch myself for getting onto Mitchell until I know that he hurt her and didn’t just make her mad somehow.

Mostly, though, they play together very nicely. Thanks to Amazon, they get plenty of hide and seek games. 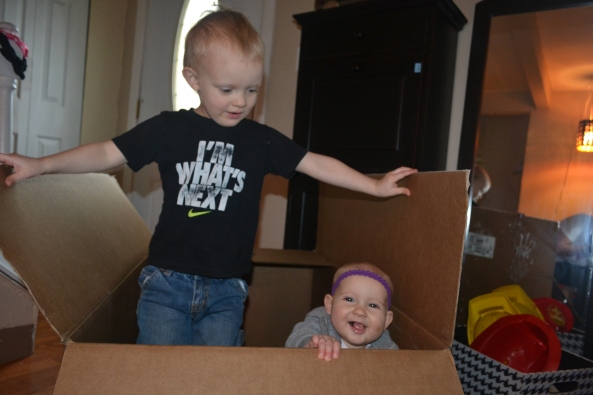 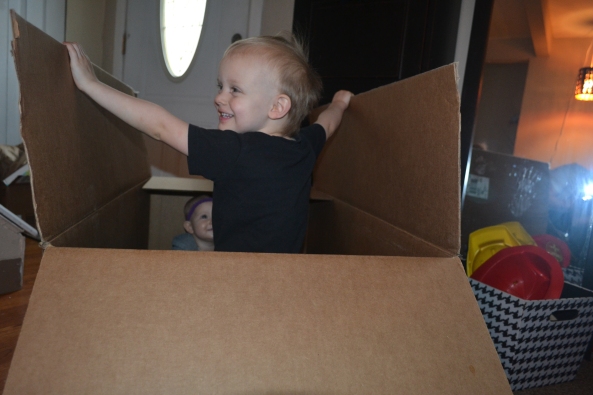 And, as a sign of how long it’s been since I transferred pictures from my camera, here’s Mitchell saying how yucky the Halloween pumpkin was. 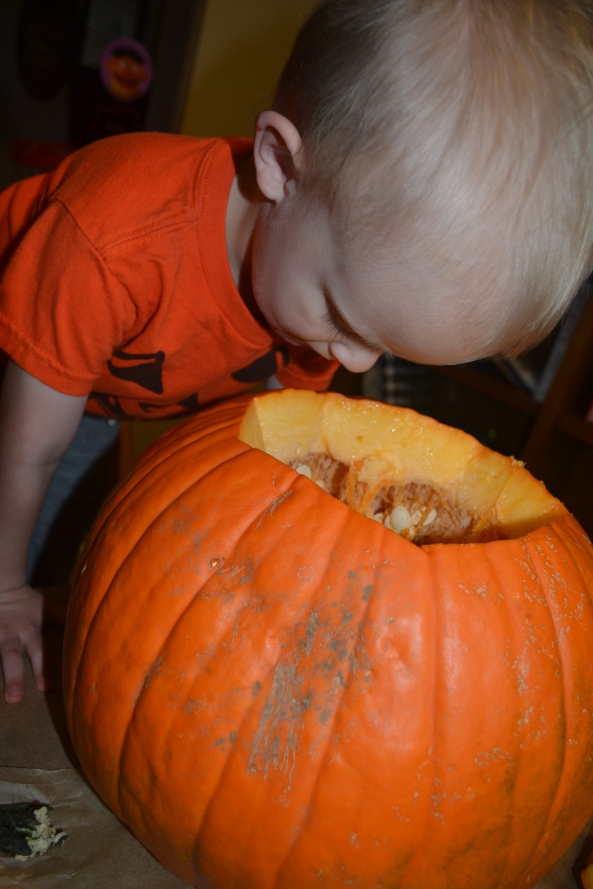 Mitchell decided he needed to take pictures of Rosie for her photo shoot, too.

Obviously these were taken a few days ago, because it’s been cold and blustery here since Friday, but we did manage to have some fun outside this week.

Mitchell figured out that the lid was left off his sandbox during the last storm, and it was filled to the brim with water. Even after I poured out all I could, he still managed to make himself a muddy mess. It was bad. Funny, but bad. He went straight into the shower.

We even got to visit a farm! It’s a public park, but it’s also a functioning farm. They have cows, horses, pigs, piglets, sheep, but Mitchell’s favorites were the turkeys and chickens. I was scared to death of the tom turkey (childhood trauma from our own devil reincarnated turkey), so I wouldn’t let him too close to the turkey. I overheard a mom pushing her son closer to the turkey and telling him turkeys were nice, and I wanted so badly to yell “No they aren’t! They’re evil! Run away!” But I managed not to. And I don’t think I traumatized my son, either. I might have put a little too much emotion into recounting the stories of our turkey to the other mom we went with, because she looked a little traumatized, but hey. At least her son won’t have scars down his legs from turkey attacks. I’m totally going to have nightmares tonight.

Oh, and Mitchell managed to lock himself into a stable in the barn. The lock was on the inside of the door. The wall was too tall for me to reach up and over to unlatch it, so I had to put Rosie down on the awesome clean floor, climb the wall, and let him out. Then he just wanted to do it all again. Meh.

This was his face by the end of our excursion. He also had a giant scrape and bruise on his knee and a few scratches on his hands. So, yeah, it might have been a fairly authentic day at the farm for him.

The shirt says “I make chubby thighs look good.” And boy, does she ever!

Those thighs are probably thanks to her very voracious appetite. The other day she followed Mitchell around hollering at him until he finally just gave her his apple. Poor kid!

Mitchell and I made biscuits and gravy this morning! But not just any biscuits: Tetris biscuits! Or, as Mitchell called them, shapes biscuits. He loved helping. So much so that he stole the rest of my cookie cutters and began handing them out like presents. But not to “Baby Margaret” (yes, that’s still happening), because she bites.

I have to say, the biscuits were darn good, but I found myself speaking in a bit of a southern accent since it was a Paula Deen recipe. Threw Mitchell for a loop.

Trying to fit all the biscuits on the Khan was just a cruel reminder that I suck at Tetris, though. Thanks, Aunt Brooke. I know that was your passive aggressive intention!

Just for your viewing pleasure, some very long overdue videos.

Attack of the tiger: https://goo.gl/photos/URy5GN6hJspB3RET6

I don’t mind Halloween. It’s not my favorite by any means, but still. I wanted to make sure Mitchell’s first real Halloween was done right. This was the first one where he kinda understood what was going on and was really excited to dress up. He wanted to dress up as Daniel Tiger (PBS show based on a character from Mister Rogers), and he wanted Rose to dress up as Daniel Tiger’s little sister, Baby Margaret. To make sure we got the idea, he started calling her Baby Margaret. He…hasn’t stopped yet. Between her myriad of nicknames and now Mitchell calling her something completely different, this poor girl will never know her name.

Anyway. From what I can tell, they don’t make Daniel Tiger or Baby Margaret costumes, so I ordered a couple Tigger costumes and added the red sweater for Mitchell and a dress for Rosie. I also spent hours and hours turning the wagon into a cardboard trolley. Unfortunately, it wouldn’t fit in my car and probably wouldn’t last more than one use anyway, so it only got used on Saturday.

Anyway. Wednesday, we went to an event at the local university. All the student organizations set up tables in the arena and thousands of terrible parents walked their children from table to table, screaming at them, cutting in front of whomever they pleased, and grabbing handfuls of candy from booths that had very large signs asking them to only take one. So, not a great time, but Mitchell enjoyed himself.

Thursday we went to a place called Scene 75. It’s a huge indoor play center. Mostly it’s an arcade, with some miniature golf, laser tag, go carts, and, most importantly, a bounce room. After we went around trick or treating, Mitchell got to play in there. He loved it. We’ll definitely be heading back there.

Friday morning the kids and I went to the mall. It was packed and there was no way in heck Mitchell was allowed to go into the play area, but he still had fun. I was exhausted afterward, but he decided he wasn’t and didn’t take a nap.

Finally, Saturday was Halloween! We started with a parade in our neighborhood, which they didn’t win because everyone thought they were Tiggers and the trolley was either a circus car, a cage, or the animal crackers box. A few kids got it, but the parents would correct them. Oh well. Lesson learned: next year we’ll go mainstream!

After all that during the week and then lots of trick or treating, it’s no surprise that Rosie passed out while trick or treating and, even though he swore he wasn’t tired yet and wanted to stay up eating his candy, Mitchell didn’t take long to join her.

And, just because she’s adorable, here’s another of Rose in her Halloween outfit, courtesy of Aunt Brooke.

My mission foot next year: concoct a convincing Halloween legend about a ghost that visits ever Halloween night and takes half their candy.